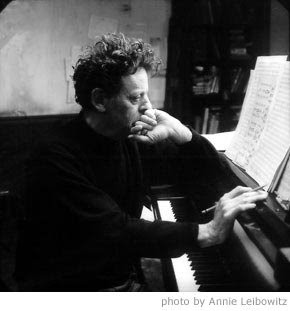 Philip Glass recently wrapped up a tour performing an original music set to Leonard Cohen's "Book of Longing" http://www.claremont-courier.com/pages/Topstory022509.1.html. Philip composed a song-cycle for Mr. Cohen's book of poetry and drawings. In addition to being a fan of Mr. Glass and his music, I've always respected the fact he composes music using a pencil. Philip Glass, pencil in hand, blank sheet of paper in front of him sitting at a piano composing original music. To me, this is an absolutely righteous picture of the creative mind balanced with technology. No thought of the pencil running out of led, no concern of the pencil crashing and making him tentative. Just Philip Glass, his imagination, the palette of sounds on the black and whites, and a pencil. It's an example of a human being working at the speed of thought in the right hemisphere of the mind unfettered by technology limitations or frameworks.

The mind is what the brain does and in that rarefied air, a single creative human thought may be the most delicate entity in the universe. If interrupted, it is certainly changed and may be lost forever. I had a discussion with Mr. Glass about that. Whether it is fingers on the black and whites or brushstrokes on canvas, that's the way technology should be balanced with the mind. The user remains spontaneous and unaware of any contrivance or technology. Philip and I both agreed the most important technology is the computer on your shoulders and it should be approached with respect. The piano itself has been a very important piece of technology and should be recognized as such. It is elegant in design and serves as a great model that illustrates how artistic performance can be balanced with a piece of technology for production power.

Michael Riesman is Philip's conductor and technology advisor. He is the producer of nearly every Glass recording (http://www.philipglass.com/music/recordings/riesmen-soundtracks.php). Riesman is also known as the Music Director of the Philip Glass Ensemble and has an association with the composer dating back to 1974. Michael is a composer and an improvisational performer. Several years ago on a trip to New York City, I sought out Michael at the famous Looking Glass Studios and was given the opportunity to express my views on art and technology. We had several more meetings. Through those conversations I provided Michael with an AMD-based computer to host a virtual grand piano for the upcoming "Book of Longing" tour. I have to say Mr. Riesman gave the AMD gear the most thorough technical evaluation of any musician we have experienced to date. A live musical performance is a mission-critical application as you can well imagine. Resetting a computer while a few thousand people wait is catastrophic. The moment is destroyed. Michael is responsible for the reliability of all the technology used for Mr. Glass’s live performances. He gave our machine many hours of testing before ever considering its use. I'm happy to say the AMD machine was used live on the "Book of Longing" tour for the entirety of its two year run without a single failure. That computer was manufactured by our amazing partners at PCAudioLabs (http://www.pcaudiolabs.com).

I recently had dinner with Michael when the tour came through Austin and we discussed some future collaboration on technology and music.

My mission and that of my team is to help put the human mind back on top of technology particularly within the context of creative endeavors. We want to ensure anything bearing the AMD name arrives as a solution and not a bag of components. We're a platform company now. We use the term Fusion. Fusion is really a philosophy about the way we work in the industry with artists such as Philip Glass and many others. We don't just throw technology at people. We try to understand their creative process so we can provide the best solution. We stand with them all the way and measure our success only on theirs.

If you shut off the television and try to create something, you're in a very small percentile of the population and I salute you. I hope if you do invite technology into your workflow, the emphasis remains on your creativity and never on technology. Technology should behave as unobtrusively as a pencil. I am committed to that view. All of us at AMD are extremely proud to be working with Philip Glass and Michael Riesman.

- Boswell
Posted by Charlie Boswell at 8:56 AM