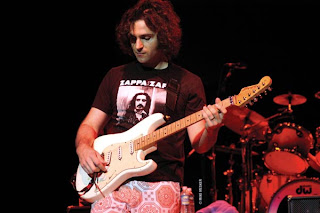 Dweezil Zappa just won a Grammy® Award recently for Best Rock Instrumental. Tell us about how you’re involved in his work.

I met Dweezil Zappa a number of years ago at an AES convention in LA. I’ve been deeply interested in his father’s music since grade school. Therefore, it was an extreme honor to meet Dweezil and his mother Gail. Dweezil was introduced to me because of his plans to use AMD technology not only to produce his own music, but to take some of his father’s existing stuff from the famous Zappa vault and put those historically important tapes into the digital domain. The vault activity is under the direction of Gail Zappa. Dweezil began using AMD workstations as a DAW (Digital Audio Workstation) with our 32-bit technology back in 2002. Since then, the relationship has progressed to where Dweezil is using our very latest quad-core processors and ATI graphics on our Fusion platforms at the legendary UMRK (Utility Muffin Research Kitchen) studio founded by his father. Dweezil embarked on the worldwide Zappa Plays Zappa tour in 2007 and that tour has continued into 2009 with several months break here and there. He is using AMD DAWs to record these live shows. The popularity and success of this tour has reaffirmed the global demand for and interest in Frank Zappa’s music. I believe a great deal of the tour’s longevity is attributed to Dweezil’s precise interpretation of his father’s catalog as well as his selection of the current ZPZ lineup. Dweezil is using AMD based Fusion DAWs to mix and master these shows while he’s out on the road and the fans are responding very favorably! These DAWs were manufactured by our excellent friends and partners at PCAudioLabs (www.pcaudiolabs.com).

This new AMD addition to the Dweezil Zappa workflow is called the “Room Service Rig” because it is sometimes operated from a hotel room after a show, or possibly on the bus in between shows. We partnered up with our friends over at Dangerous Music (www.dangerousmusic.com) to make the "Room Service Rig" happen. Dweezil records the shows live, then mixes, masters, and uploads those shows within a few months after a live performance. Dweezil went from zero to sixty on the PC over the course of about 5 months and has really amazed me personally in his ability not to lose focus on the music and falling into a technology morass. The chief role of my team at AMD is to work directly with the artist to insure AMD based technology arrives as a solution and not just benchmark or some other nerd synthetic seal of approval. The technology culture left to its own devices actually has the ability to push or steer the artist out of his/her aesthetic pursuits and lead them down an endless technology highway that ends in the nerd cul-de-sac of disappointment. This process transforms the artist into a technologist with his/her aesthetic oftentimes completely destroyed. This is Global Nerding.

Dweezil just won a Grammy® for Peaches En Regalia, which is a live recording of one of Frank Zappa’s most well known compositions. He is someone who understands that technological solutions should be balanced perfectly with the artist’s performance capability. That’s the way we like to approach all of our artists: we try to balance artistic performance with production power. It’s a different way of looking at technology. We measure success based upon what the artist is able to achieve and not just on some nerd technology attribute. Dweezil’s Grammy® is an example of that principle in action. The Digital Media and Entertainment team at AMD has filmed a couple of shows for Dweezil which we’re working on for several DVDs of live ZPZ material. This is an example of how the AMD Digital Media and Entertainment team engages with the artist. We’re out there with them on tour many times testing our technology on the firing line in terms of video, audio, pre-production, and post production. Everyone on my team is an artist first and foremost. We take the customers perspective because we are all actually customers ourselves. We all use AMD technology in our own productions. This is the Fusion culture at AMD. 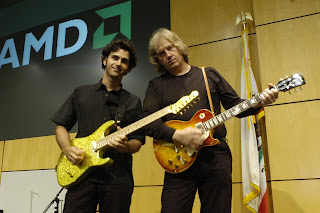 Posted by Charlie Boswell at 1:12 PM